Slide show of the 'Celebritiy Patriots' we were able to meet and give complimentary games to . . . 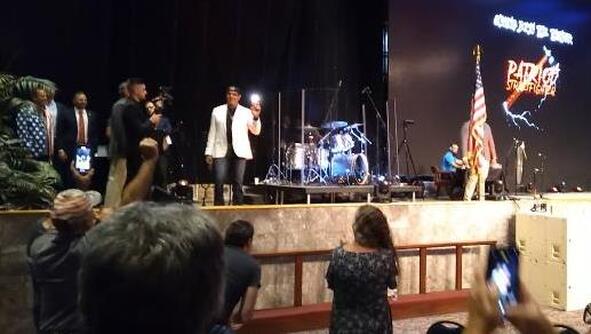 The audience exploded when The Patriot Street Fighter, Scott McKay (whose daily show is on AMP - AmericanMediaPeriscope.net) came on stage waving his tomahawk.  Busloads of audience members had to just leave when they needed to for meals, etc., because speakers went NON-STOP from 8 am to almost 10 pm both days. Those who left when Scott came on missed a great entrance.
HOW GOD WORKED TO CREATE GREAT AWAKENING CARD GAMES:
We are Steve and Jeri Mertes, a retired couple from Florence, AZ, and our partner is Sean Morgan of Pennsylvania, currently living in Brazil with his wife Cybele and son Enzo, and anxiously waiting to get back into the States. (Sean's re-entry has been held up for a couple of years by the Deep State, while they allow thousands of 'illegals' to cross the border into the US every day - please pray for Sean and his family!)
We were put in contact with Sean by God’s divine plan.
God never ceases to amaze us in the way He works in our lives.  About 2 years ago Steve connected with Sean by email after watching his “Sean Morgan Report” and we’ve been communicating with him on a regular basis ever since. After he became the host of MSOM, we told him in an email that we wanted to ‘adopt him’ as our ‘grandson’, and he liked the idea, responding that he would also officially adopt us as his ‘grandparents’. Needless to say, we can’t wait until he and his family are able to move back to the U.S.  We have promised to take them to the Grand Canyon and show them the rest of our remarkable state of AZ.
One day, out of the blue (God’s hand) Sean told us he had an idea for a game, but had no idea how to design or develop it, and wondered if we might have some ideas.  Obviously God had planted that thought in his mind, because we had never mentioned to him that we had designed several games in the past.  So we took on his project and spent the last 7 months or so developing the Great Awakening Card Games.
Sean had already produced some beautiful art portraits of some of America’s outstanding patriots, and we decided to develop the game around them.  So now we have “Gitmo” and several other games using the same 100 cards.
But God wasn’t finished.  Steve and I have created numerous projects over the years, with God’s help, but He never gave us a way to market them until we met Sean.  Now, through AMP and other amazing divine appointments, God has opened doors that we never dreamt possible, and He is allowing us to bring our ‘work’ from the past into this present reality. Eph 2:10 says, "For we are God's handiwork, created in Christ Jesus to do good works, which God prepared in advance for us to do."
He obviously knew all along how He was going to use all the skills and talents he had given us and Sean, and then put us together for a reason.  We say, “God planned all of this for just such a time as this”.
So we are happy to present this game and the other things you see on this website to all of you for your entertainment, education and/or awakening, and we hope you will share it all with others. And we are looking forward to developing additional games for your pleasure in the coming months, so stay posted.
Through the things offered on our site, we hope to make enough profit to help several patriotic Christian charities that Sean and we have been wanting to support. We thank you from the bottom of our hearts for wanting to be a part of this and helping to make this happen.

​UPDATE as of 7/16/22:  God is not through working with us on this:
Sean spoke to John Michael Chambers, founder of American Media periscope where Sean hosts the Making Sense of the Madness Program, and John took an interest in our game.  His admin assistant, Kris, contacted us to inform us that she could get us VIP tickets to the sold out 'Clay Clark's Reawaken American Tour' in Virginia Beach, VA, which would be starting in just a week - on July 9th and 10th.  They had decided to work with us, through their channel, to promote our game and felt if we could swing a trip to VA we could 'launch' the game there.  GOD IS AMAZING!  He helped us put it all together and we DROVE from Florence AZ to Virginia in 5 days and made it to the event.  There He helped us meet many of the Patriot's who are included in our game and also connected us with others who will be influential in getting the game out there.  In the slide show above, you can see some of the photos from the event, where we were able to personally give complimentary games to General Flynn, Ann Vandersteel, Patrick Byrne, Scott McKay, Mel K, Charlie Ward, Judy Mikovits and others.